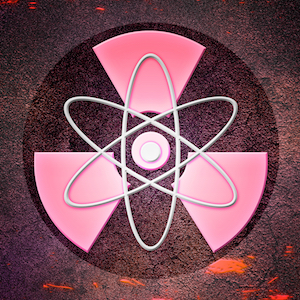 Although they are both metals, gold and uranium have little in common.

Interest does not simply have to be compounded annually or monthly. Any time interval is allowed. Banks could compound the interest weekly, daily, hourly or by the second. In fact, they could continually make it worse. Using the example above, $1,000 at 5% continuously compounded interest would be worth $1,051.27 after one year2.

The formula for continuous compound interest is:

This “magic number” e is technically known as “Euler’s number” or “base of the natural logarithm”. Like the other better known magic number pi (π), which is approximately 3.14, e is found everywhere in nature, sometimes in totally unexpected places3. Not only is it in finance, but e also appears in statistics, population growth, physics, and various bizarre mathematical phenomena4. And yes, it plays a role in radioactive decay.

While the gold you sold makes money, the uranium slowly decays. It turns out that all radioactive elements follow the exponential decay formula:

Uranium decays very slowly. It would take 4.5 billion years for half an ounce of uranium to decay into lead.

What Radioactive Decay and Compound Interest Have in Common

Notice how similar the formula for radioactive decay is to the formula for continuous compound interest. They are almost identical. They both involve elements (money or atoms) increasing or decreasing, a period of time the elements increase/shrink, a rate at which the elements increase/shrink, and the magic number e. In fact, we could rewrite the radioactive decay formula using the letters of the compound interest formula:

Now it is perfectly clear: the formulas are almost identical. The only difference is that in the case of compound interest, e is raised to a positive power, whereas in the case of radioactive decay, e is raised to a negative power. Makes sense. In the example of compound interest, the money increases; in the example of radioactive decay, the original atoms disappear.

What’s up with e?

In effect, e is a very strange number. Unlike π, it is not based on anything geometric. Instead, it’s a number involved in rates of change, which is why formulas that describe growth/decline often contain it. The Numberphile, mathematician and YouTube sensation, calls e “the natural language of computation.”6

So, put this little number in your memory. Next time someone discusses the wonders of π, wow them with the even greater wonders of e.

(1) The most common isotope is uranium-238, which has a half-life of about 4.5 billion years. After 7 half-lives (~32 billion years), less than 1% of the original uranium would remain.

(3) This is a great video on where e can be found.

(4) The best example of a bizarre mathematical phenomenon is Euler’s identity: eiπ + 1 = 0. This formula is so incredibly weird because it contains two irrational and seemingly unrelated numbers (e and π), as well as the number “i”, which is imaginary. (Don’t ask.) When e is raised to the iπ power, the result is -1.

(5) The decay constant is essentially a rate, and it is inversely proportional to the half-life of the isotope.

(6) Here is the video from Numberphile.